I’m a creative, good-humored guy who cares a lot about user-friendly experiences, civic responsibility, and the environment. I've been a web developer for 15 years, and for the past 8 years I've been telecommuting from an acreage outside Iowa City, where my wife and I grow pick-your-own blueberries. We are also the stewards of two rambunctious llamas, Jake and Elwood, and we're renovating our 100-year old barn to host rural events (scary movies are better in an old barn!).

I grew up on a 2,000-acre corn and soybean farm in southeast Iowa. I did farm stuff like driving tractors and baling hay, and I rode our farm's old blue ATV like I was competing in the X Games. But I alse loved computers. My family got our first computer in 1990. It had a 20 mHz processor, and one of the greatest presents I got was a SoundBlaster sound card. I was totally a rural nerd. 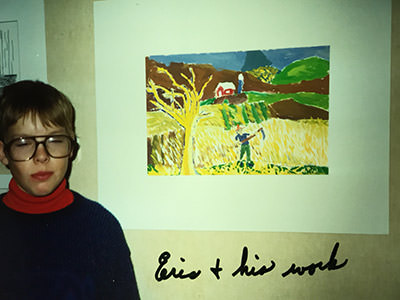 I've made several reversals in my life when I have encountered compelling evidence to change. I used to believe running would lead to some kind of crippling injury, and I even bought an elliptical machine to protect my joints. But then I read Born to Run by Christopher McDougall, which details evidence that humans actually evolved to be great long-distance runners. (Did you know humans can beat a horse in a marathon?) Now I run several times a week cross-country for exercise, and I own a treadmill.

I'm also OK with being wrong. I feel like it's better to stick my neck out and and suggest an idea than it is to keep quiet (even if the idea is flawed, it may lead to a better idea). I welcome feedback from colleagues and stakeholders and happily make changes to my work.

I have an underlying drive to connect people and reveal their common ground. Part of the reason I like co-leading our local chapter of Citizens' Climate Lobby is that CCL's approach involves having civil, respectful conversations with Democrats and Republicans about climate change. And I have a pet project of developing an app that helps people have difficult conversations with each other.

I’m empathetic and a good listener. In meetings and conversations, I work hard to hear everyone and help them have the space to complete their thoughts. In video chats, it's not always obvious when someone interrupts another person, but when I notice it, I wait for the current speaker to finish and then I ask the interrupted person what they were trying to say.

I love visual design. Though I don’t have formal training, I have a passion and talent for creating designs, both for the web and otherwise (my hobby business is designing funny t-shirts and stickers). It's thrilling when I stumble across a new idea and the design clicks into place. I have the most fun coding when inventing a visual animation or recreating a complex visual design in code.

I’m an engaged citizen and civic-minded. A few examples: